In Need of Electrical Fault Finding?

What is electrical fault finding? The testing of electrical cabling or devices as a process of elimination until the fault is located.

Electrical faults can play havoc to your home or business and can produce an unexpected annoyance when a fault leaves you with no power or lighting. Faults can become a safety concern or even a fire hazard depending on the type of fault you have and contacting a licensed electrical contractor is the first thing you should do.

What type of an electrical fault do I have?

Faulty appliances – when a customer calls and tells us their safety switch wont stay up, our first instinct is the kitchen. The majority of electrical faults relate back to the kitchen, and appliances will always be the main suspect. If we feel that this may be the problem, the customer will be advised to unplug all appliances and any other types of equipment such as kettles, toasters, microwaves, power boards or heaters. Supposing the safety switch stays up, we know the problem is lies with an appliance. The best course of action, plug one appliance in at a time until the safety trips again. You will find the defrost element in a fridge to be a common problem and the first thing you should try is defrosting the fridge for 24 hours.

In electrical terms, other types of faults that will appear on the electrical system include short circuits, open circuit, earth fault, circuit breaker or fuse and smoke alarms. Lets take a closer look at these electrical faults.

Short circuits – have you ever heard a bang coming from a power-point, lighting point, circuit breaker or even the power-board, it’s more than likely you’ve just heard a short circuit. When the current on your live cable becomes exposed and makes contact with the earthing system [that green and yellow cable] you now have what is known as a ‘short circuit’. Short circuits can appear in many different ways but the oblivious one is the breakdown on the cable insulation and this is exactly why we use circuit breakers, RCBOs and and even fuses to protect us from this type of fault. Other known short circuits can result from storms or water damage, water in outdoor light fittings or outdoor power points would be a well known place to investigate.

Open circuit – any break on a live or neutral conductor is called an open circuit and can occur on a faulty switch or a break in the cabling. There always needs to be a closed circuit for current to flow and if a break occurs anywhere on that path, current will cease to flow to the point of break. A good example of an open circuit would be if water was to flow through a garden hose pipe and just lets say this pipe became damaged and a hole occurred causing a leakage and water flow to stop. This in turn would also be known as an open circuit.

Defective Safety Switch/Fuse – not only do we have faults on cabling or appliances but our protection devices such as RCBOs and circuit breakers can give way after a period of time. Like most electrical devices, safety switches or circuit breakers are no different, they always fail eventually due to age or a possible electrical surge has come down the main line. Safety switches should be fault finding tested and checked at a 6 month intervals for correct operation, there should be a small blue or black test button on each individual safety switch. 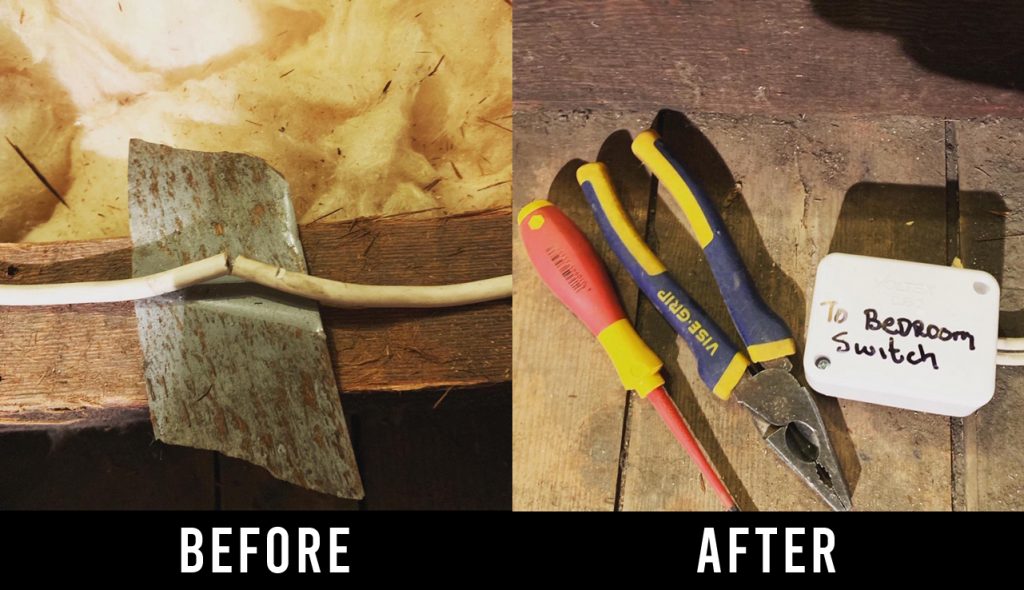 What can I do before calling a fault finding electrician?

On occasions you might not need to call a fault finding electrician in the event of an electrical fault, it might just be, one of your appliances needs to be unplugged or maybe a circuit breaker is tripping an RCD {safety switch} . As briefly explained above, the first protocol should be to unplug all appliances if they are on the affected circuit and if the safety switch or circuit breaker remains to stay down, call a electrician immediately.

If your switchboard has a one or two RCD system protecting individual circuit breakers, one simple trick we like to tell our customers, turn off all circuits breakers and reset your RCD, when all circuit breakers are on the off position, switch one at a time until RCD trips. The circuit breaker that has tripped the RCD should now remain off and power should be restored on the healthy circuit breakers once you have switched them to the on position {Please see our tutorial video for instructions}.

A fault finding electrician should be called to rectify the fault on the circuit breaker.

Is there too many appliances running at the one time?

Protective devices such as circuit breakers or RCBOs will trip on overload when to many appliances run simultaneously. You can always try to unplug appliances to reduce the load on the safety switch or circuit breaker and try moving appliances to a different circuit to balance out the load. If your appliances continually trip on overload it might be best to add new circuits and safety switches to accommodate the load of the appliances. This procedure will reduce the risk of damage to your cables or appliances and even stop your home from being destroyed by a fire.

How do we fault find

We will always have a brief discussion over the phone to gain relevant information on what kind of fault we might be dealing with. This information will be useful and will give us a head start on locating the problem before we arrive on site.

Once we arrive on site our first protocol will be to gather as much information as possible and some brief checks on the switchboard to see if the safety switch resets. If the safety switch fails to reset we will visually investigate lighting and power equipment and if nothing cant be found with the naked eye the test equipment will need to be brought into action.

The insulation resistance test is one of the first tests we do, this test will determine if the insulation on the cable has deteriorated and if the current is leaking were it shouldn’t be. A good insulation test will have high resistance but never perfect as all known insulation will have a small amount of leakage currents, small enough so that it doesn’t cause trouble with the safety switches. This test is undertaken by using an IR tester and can cause current to flow around the insulation of the cable and can measure up-to to a 1000 volts.

Sometimes we might find the circuit is all clear on the insulation resistance test, it’s possible the safety switch could be faulty so it might be worth replacing the RCD/RCBO. This can be a known problem with the lesser name brands out there.

The visual test is the first test we do, always a good idea to take a look around for damaged lighting or power points. We always start with the outdoors as water damage is quite common in outdoor power and lighting points. It’s a good place to start opening electrical equipment if any signs of water can be seen to drip from outdoor power points or lighting fixtures.

How long will it take to find an electrical fault

Fault finding can vary in time but we can safely say that the majority of electrical faults can be found within the first hour. All faults should be located on the day of inspection and your power or lighting circuits should be back up and running as normal. A good electrician will know first hand, were to start working on the faulty circuit, once he has gathered the relevant information from the customer.

What happens when you call us

Fault finding Sydney electrician calls are answered by our owner, Ken. He will talk you through what the best solution to your problem is and identify the best course of action to take once he arrives at your property.

If you don’t have electricity at all in your home you may be experiencing a power cut. Don’t waste your money by calling us, check to see if there is a power outage in your area. Your energy provider’s website will tell you if you have been affected or not.

Do you have an electrical or security project you would like us to quote for?